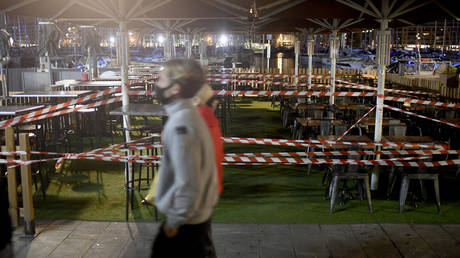 The entirety of France will be placed under a 6pm-6am curfew for at least 15 days from Saturday in a bid to ease the pressure of Covid-19 on the country’s health system, Prime Minister Jean Castex announced on Thursday.

The 12-hour curfews are currently already in place for 25 of mainland France’s 95 administrative areas – known as departements – but they will now be extended to the rest of the country, which is currently under an 8pm curfew.

“While the resumption of the epidemic was concentrated at the end of December in certain departments, viral circulation now concerns the entire country,” the PM said during a televised news conference.

“The pressure on our hospitals remains stable, but is at a high level,” Castex added, explaining that the incidence rate of the virus among the population is now at an average of 50 cases per 100,000 people.

Castex also announced other health measures, including that from Monday all arrivals from non-EU countries must provide a negative PCR test, and then isolate for seven days immediately after arrival.

All indoor sports and activities will be banned, but French schools can remain open for a combination of distance learning and face-to-face teaching, though without any mixing of pupils between classes or in canteens.

“If we see a strong deterioration of the epidemic in coming days, we would have to decide, without delay, on a new lockdown,” Castex added, in a possible hint of stronger measures to come if the situation worsens.

More than 69,000 people have died from Covid-19 in France, the world’s seventh highest death toll, while the country has been averaging around 18,000 new infections every day for the past week.