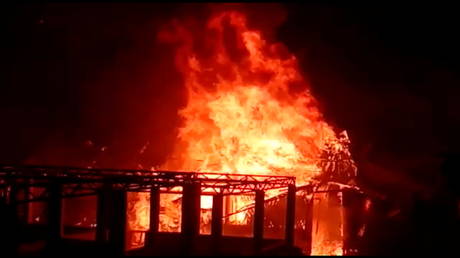 A devastating blaze swept through a decades-old UN Rohingya refugee camp in Bangladesh in the early hours of Thursday, destroying more than 550 homes and displacing about 3,500 people, UN aid workers said.

The fire struck a UN camp in southern Bangladesh, with footage circulating on social media of the flames raging and completely burning down a whole segment of the site.

This fire has destroyed thousands of houses, market, mosque, school, etc. in E block Nayapara #Rohingya refugee camp in #Bangladesh on 14 Jan 2021 at around 1AM. pic.twitter.com/TemLDDwZw1

Firefighters’ efforts to extinguish the flames were reportedly impeded by exploding gas cylinders within people’s homes, and they spent hours tackling the blaze. While managing to prevent the flames from spreading further out from the camp, they could not save shelters or belongings.

Hours after the fire was put out, residents of the camp were seen searching through the ash-strewn ruins in an attempt to rescue any possessions that might have survived.

The aftermath of the fire in Nayapara refugee camp in #Bangladesh. #Rohingya families need urgent assistance and shelter.

Complete destruction in the Nayapara refugee camp. These are the Rohingya who have been here 30 years, who humanitarians coming for stints in Bangladesh don’t even know exist. 30 years and their homes gone in one night.

A teacher I know lost his home and the school he built. pic.twitter.com/nmsL6hZoCn

The UNHCR said it would provide support to those affected, including clothing, food, and medical care, as well as working with authorities to investigate the cause of the fire.

Following the fire, Save the Children’s country director in Bangladesh, Onno van Manen, labelled it “another devastating blow for the Rohingya people who have endured unspeakable hardship for years.”

Around a million Rohingya people are based in camps on the mainland in southern Bangladesh, with thousands having been moved to remote islands in recent weeks, against the wishes of human rights groups. The majority of residents in the camps fled Myanmar after the country launched a crackdown against them, which the UN has labelled “genocide.”