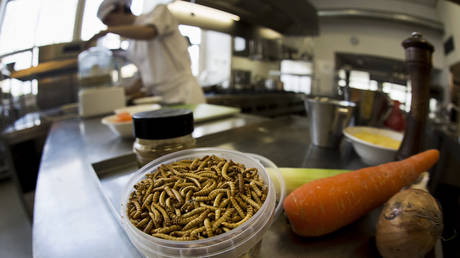 Europeans are a step closer to finding all sorts of creepy crawlies on the menu as the EU Food Safety Agency (EFSA) has officially deemed the first such species – a yellow mealworm, to be specific – safe to eat.

The development means that people buying pasta, burgers and even biscuits in a store somewhere in Europe might soon find out that their food is made of mealworms, thoroughly dried and ground into powder, while those of a more adventurous nature may be able to buy a baggie of whole dried insects as a snack.

Such possibilities are about to open up following the decision by the European food safety watchdog. The EFSA panel has concluded that dried yellow mealworms are “safe under proposed uses” and their consumption is “not nutritiously disadvantageous,” the agency said in what it called “the first completed assessment of a proposed insect-derived food product.”

Despite being called a ‘worm,’ mealworms are in fact a larval form of a darkling beetle known as Tenebrio Molitor, or the flour beetle. The “novel food,” as it is referred to in the EFSA opinion paper, is deemed to have “high protein content.” However, it might not be an appropriate snack for everyone, with the agency warning that those suffering from allergies to crustaceans and dust mites could suffer adverse reactions.

The decision marks another step by the EU towards making insect-based menus a reality across the bloc. Back in 2018, the union updated its legislation to make it easier for all sorts of “innovative” firms to get into the European market by obtaining approval from the EU regulator.

Any company which satisfies the conditions and labelling requirements set by European Food Safety Authority can now sell an authorized product. And it seems there has been no shortage of those willing to fill Europe’s shop shelves with all sorts of rather unusual edible products.

According to media reports in December, the EFSA received more “innovative food” applications after 2018, when the legislation came into force, than over the previous 14 years. The agency received 156 requests since January 2018, compared to just 90 between 2003 and 2017. The list includes unorthodox products ranging from algae, mushroom powder and some “miracle berries” from West Africa, to various insect species.

Some experts cited by the EFSA see a move towards insect-based foods as a positive step for humanity – both financial and environmental.

“There are clear environmental and economic benefits if you substitute traditional sources of animal proteins with those that require less feed, produce less waste and result in fewer greenhouse gas emissions,” Mario Mazzocchi, an economic statistician and professor at the University of Bologna, said.

“Lower costs and prices could enhance food security and new demand will open economic opportunities too, but these could also affect existing sectors,” the economist added.

Whether ordinary Europeans agree is another question, and insects may well prove not to be to everyone’s taste. “There are cognitive reasons derived from our social and cultural experiences, the so-called ‘yuck factor,’ that make the thought of eating insects repellent to many Europeans,” Giovanni Sogari, a social and consumer researcher at the University of Parma, said while hoping that “with some time and exposure such attitudes can change.”

The UN declared insects, which are quite popular snacks in other parts of the world such as Asia, South America and Africa, a healthy option quite some time ago. A 2013 report by the UN Food and Agriculture Organization said it would be a good way to combat food scarcity.