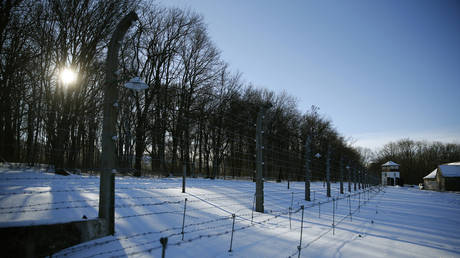 The German memorial at former Nazi concentration camp Buchenwald had to issue a bizarre warning, telling people to respect the dead, as some apparently went for sled rides over the mass graves.

In a statement on its website, the Buchenwald and Mittelbau-Dora Memorials Foundation cautioned that “cases of disturbances to the peace of the dead due to winter sports activities near the grave complex will be reported.”

It appealed to people to behave in a way that preserves the dignity of the site, which decades ago was a place of executions for thousands of inmates.

Meanwhile, recent days saw masses of winter sports enthusiasts visiting the memorial and some of the sled tracks “ended at the graves,” Jens-Christian Wagner, the director of the foundation, told Der Spiegel. Wagner said he understands people are tired of current Covid-19 lockdowns and want to spend some free time outside. That can be no excuse, however, for sledding at the memorial, he lamented.

The Nazis imprisoned nearly 280,000 people in the Buchenwald concentration camp on Ettersberg hill near Weimar between 1937 and 1945, and in 139 satellite camps.

More than 56,000 inmates died there as a result of torture, medical experiments, and emaciation, the majority of whom were Jews, Sinti and Roma, resistance activists, and homosexuals.

In April 1945, thousands of prisoners stormed the watchtowers and took control of the camp, with US troops entering the death camp shortly afterwards. Dwight D. Eisenhower, the commander-in-chief of the Allied Forces, said, “Nothing has ever shaken me like this sight.”

Today the camp serves as a place of learning and memory, with exhibitions, an archive, and a library.