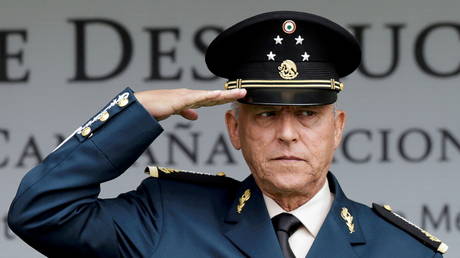 Mexico said it will not prosecute former Defense Minister Salvador Cienfuegos, whose arrest by the US on drug trafficking charges led to diplomatic tensions between the countries.

“It was concluded that General Salvador Cienfuegos Zepeda never had any meetings with members of the criminal organization investigated by US authorities, nor did he have any communication with them, nor did he carry out acts aimed at protecting or aiding said individuals,” Mexico’s Attorney General’s Office (FGR) said.

In a tweet, the FGR added it will not take “any penal action” against the retired general after studying the evidence sent by the US and submitted by Cienfuegos himself.

Cienfuegos, who served as secretary of national defense from 2012 to 2018, was arrested at the Los Angeles airport at the request of the US Drug Enforcement Administration (DEA) in October 2020. US prosecutors said they intercepted thousands of text messages showing that Cienfuegos, operating under the alias ‘The Godfather’, was helping the H-2 Cartel deliver large shipments of heroin, cocaine, and methamphetamines to the US in exchange for bribes.

Washington dropped the drug trafficking and money laundering charges against Cienfuegos in November 2020, agreeing to extradite the former official to Mexico. AP reported at the time that the unusual step was taken after Mexico threatened to expel the DEA regional director and agents unless the US dropped the case. According to the Wall Street Journal, Mexican President Andres Manuel Lopez Obrador personally pushed for Cienfuegos’ extradition.