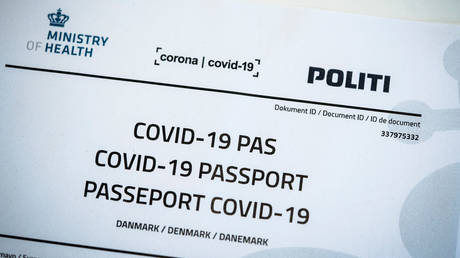 US tech and health behemoths have joined forces to roll out yet another Covid-19 vaccination passport, dangling a return to international travel but raising more questions about the future of privacy.

Along with healthcare nonprofit Mayo Clinic, health and tech companies including Microsoft, Salesforce, and Oracle have united to form the Vaccination Credential Initiative, aimed at devising a secure “health passport” that tracks the bearer’s vaccination status across borders.

In a press release on Thursday, the CEO of VCI member the Commons Project Foundation argued such passports were necessary to “safely return to travel, work, school, and life, while protecting their data privacy.”

The group is working on technology that will allow jab recipients to carry an encrypted copy of their “immunization credentials,” storable in the digital wallet of their choice. If the recipient does not have a smartphone, they could receive a paper version printed with a specialized QR code. The participants have emphasized they want to make “electronic access to vaccination, testing, and other medical records” accessible to rich and poor alike, “as easy as online banking,” in the words of Oracle exec Mike Sicilia.

However, there remains no proof that receiving the recently-approved Pfizer-BioNTech or Moderna jabs actually will stop the recipient from spreading the virus, as both companies have admitted. VCI members nevertheless believe that being able to produce proof of inoculation is a vital step to resuming international travel and that governments and airlines will soon demand travelers carry such proof with them.

While VCI and other developers of vaccine passports like CommonPass insist these projects are the result of growing demand by governments and the travel industry for proof of vaccination, some in that industry believe that requiring vaccine passports would actually spell the death of tourism. Last month, the head of the World Travel and Tourism Council warned that governments mandating travelers carry vaccination certificates would “kill their sector,” while human rights group Privacy International argued health passports would quickly spiral into a “global identity document” and severely impinge on human freedom.

However, other airline trade groups have gone on the record with their support for CommonPass and similar health passport apps. OneWorld, Star Alliance, and SkyTeam issued a joint statement in November praising the idea of “digital health passports,” arguing such technology would encourage people to return to airline travel much more quickly than a patchwork system of quarantines and isolation mandates.

The World Economic Forum, one of the biggest boosters of vaccine passports, has been pushing for global identity documents since long before the Covid-19 pandemic, and the VCI’s proposed health passport closely resembles its Known Traveler Digital Identity project. KTDI combines the functionality of a passport with the tracking capabilities of a smartphone app and includes not only medical records but financial data as well. The WEF has admitted it is currently testing “components of the KTDI concept in a real-life, cross-border context” in partnership with airline travel bodies, and it is working with the Commons Project – a member of the VCI – on that initiative.

Los Angeles last month announced it will allow recipients of the Covid-19 vaccine to store proof of immunization in their smartphone wallets. While the technology will initially be used to remind them of when to get their second shot, officials have admitted it could eventually be used to allow recipients privileged access to large gatherings or air travel.