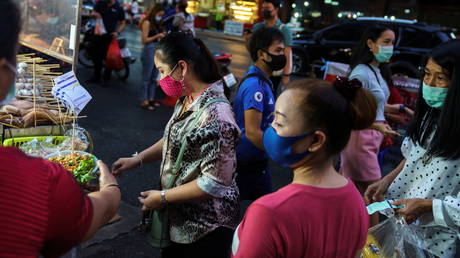 Tourist traffic to Thailand has plummeted during the Covid-19 pandemic. Now the kingdom is introducing a visitor tax to help pay Covid-19 costs and is being urged to legalize gambling to stop its spread in underground

Every visitor to Thailand will soon have to pay a new $10 tourism tax and the measure will come into force once they formalize the plans.

The tourism tax was supposed to have come into effect last year to pay for the upkeep of visitor attractions but was put on hold because of the pandemic. It will come into effect soon, once it is published in the kingdom’s Royal Gazette, and about 10 percent will now be used to cover coronavirus-related costs.That’s as Thailand’s former Finance Minister Korn Chatikavanij says the government needs to legalize underground casinos to help contain the spread and to raise more money needed during the pandemic.

Covid-19 has hit the kingdom’s tourism industry hard. In 2019, it welcomed 40 million tourists who added $60 billion in spending. Last year, just 6.5 million came, and about 500,000 of those were stranded when the Thai government imposed a strict lockdown in March.

Tourists are allowed to enter Thailand now but need to prove they are free of coronavirus, and undergo three Covid-19 tests during a mandatory 14-day quarantine period.

The country has fared better than most with just 69 deaths and 11,450 cases up to Thursday in a nation of 66.5 million. Officials are concerned that illegal gambling dens and cockfighting rings are to blame for recent spreads. On January 3, officials recorded a new daily high of 745 cases.

Officials have stepped up their fight recently on illegal casinos. On Thursday night, police in Bangkok arrested 40 people at an underground gambling den and seized tables, chips, cards and a thermometer used to measure the temperatures of the illegal gamblers.

The raid followed one last week in nearby Pattaya, where 21 were arrested in two neighboring condominiums that had been converted into an illegal casino.