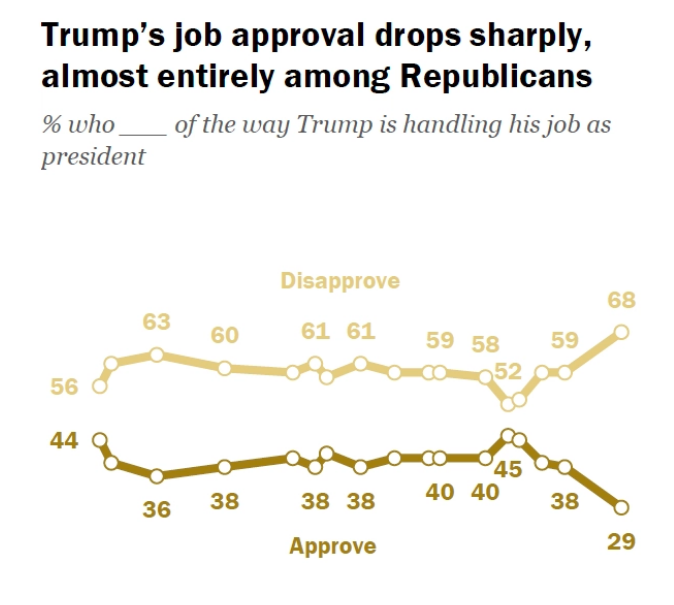 After becoming the first and only president to be impeached twice, Donald Trump is closing his history-making week with another critical blow: the worst poll numbers of his entire presidency.

According to the latest from Pew, only 29 percent of Americans approve of Trump’s job performance, with an increasing number of people rejecting Trump’s post-election, conspiracy-filled campaign to overturn the election results. 68 percent say that he should stay away from national politics for good. The survey, which was taken two days after last week’s murderous attack on the Capitol, mirrors the overall trend in Trump’s cratering support around the country.

But perhaps the most devastating news for the departing president can be attributed to his own party. Pew found that Republicans drove the sharpest decline in Trump’s approval rating. Take a look at that precipitous drop here:

Of course, don’t give conservatives too much credit. The same survey found that 64 percent of Republicans, though increasingly displeased with their leader, believe that Trump did in fact win the election, even as court after court has proven that claim entirely false.

If we’re being generous, that could maybe explain a majority of House Republicans voting to reject the election results and give the pro-Trump mob exactly by storming the Capitol mere hours before. But as Trump’s abysmal numbers show today, that myopic view is all but certain to put them in direct contrast with an increasing number of Republican voters who ostensibly see beyond Trump’s baseless haranguing to ultimately see a man they no longer want anything to do with. Of course, the majority of Republican lawmakers don’t appear particularly concerned with taking the long view on these matters—and that’s great for the mob.