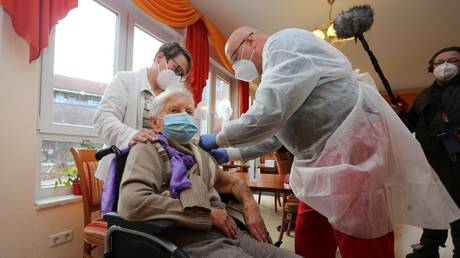 German privacy law is rigorous. Forced to improvise, officials in one state sent letters to people with old-sounding names, in the hopes of inviting them to get vaccinated.

The German state of Lower Saxony began vaccinating citizens against Covid-19 at the end of December, with priority given to the elderly and vulnerable. People over the age of 80 have been sent invitations urging them to make a vaccination appointment, but the state’s strict privacy laws have hampered this effort.

So, guessing based on the names’ popularity, those named Hans, Klaus, or Ilse may have received invitations to get vaccinated, while elderly Saxons named Lara or Lukas, for example, may have been skipped over.

That’s because Lower Saxony’s interpretation of Germany’s Federal Registration Act forbids authorities from hiring a private company to trawl municipal registries for elderly people and their addresses, as the state government planned on doing. Instead, state officials have used a database maintained by Deutsche Post, which lists addresses but not full dates of birth.

As such, vaccination officials have pored over the Deutsche Post database, and in some cases simply guessed people’s ages based on their names.

Looking at a name can give a rough idea of someone’s age. Few German parents these days name their sons Fritz, while you might not meet too many octogenarians named Mia. But there are always exceptions, and the state government noted that “not all people in Lower Saxony who are older than 80 will receive a letter.” In a follow-up statement, the government asked municipalities to contact their own elderly residents and urge them to make their own appointments.

While privacy rules are tight in Lower Saxony, they are also rigorous in Germany as a whole. Unlike in its western European neighbors, few streets in Germany are explorable in Google Maps’ Street View mode. Police are not allowed to name suspects, and courts cannot name even convicted criminals.

However, even if authorities in all 16 German states could trawl databases and contact their elderly citizens, there wouldn’t be enough vaccine doses to go around. According to the Bild tabloid, German Chancellor Angela Merkel told her MPs this week that sufficient stocks likely won’t be available until July, after publicly downplaying rumors of a shortage for weeks. In Lower Saxony, Health Minister Dr. Carola Reimann announced on Friday that fewer than 60,000 doses per week will be administered for the foreseeable future, meaning the state’s roughly 500,000 octogenarians may not be vaccinated until April at the earliest.