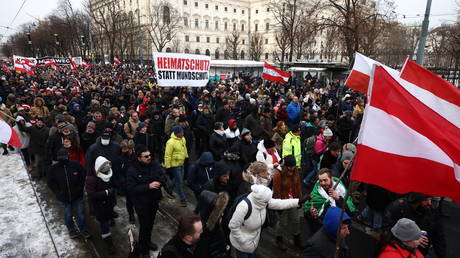 Some 10,000 people marched through the center of the Austrian capital Vienna on Saturday to protest against restrictions aimed at stopping the spread of Covid-19, and to demand the resignation of Chancellor Sebastian Kurz.

Coronavirus skeptics took to the streets as Kurz and his government discussed the possibility of extending the ongoing third lockdown in Austria, which includes movement restrictions and the closure of all non-essential businesses. The official announcement is expected on Sunday.

Two rallies took place in different parts of the city, which rarely sees large protest action, before uniting into a single march of around 10,000 people, according to local media. Most in the crowd ignored police calls to abide by social distancing rules and wear facemasks. On the contrary, the people greeted each other with kisses, hugged, and danced.

Banners carried by the demonstrators read: “Kurz must go” and “Make influenza great again,” a play on the campaign slogan of outgoing US President Donald Trump.

At some point, two dozen anti-lockdown protesters tried staging a sit-in on the Ringstrasse – a circular boulevard in Vienna’s historic center – but were attacked by a group of counter-protesters, identified by local media as football hooligans.

“We will vaccinate you all,” the attackers reportedly shouted. But the police quickly interfered and separated the sides, with the rally seeing no other serious incidents.