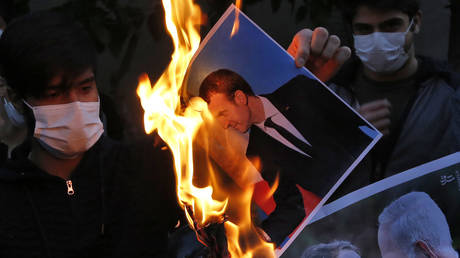 The top Iranian diplomat took to Twitter on Sunday, sending an angry message to France’s foreign minister. Zarif signaled that Paris is in no position to lecture Tehran on anything, pointing fingers at French arms sales to Saudi Arabia – and getting quite personal with Le Drian as well.

Reality check: YOU are destabilizing OUR region. Stop protecting criminals who chainsaw their critics and use YOUR arms to slaughter children in Yemen.

“Dear colleague: You kick-started your cabinet career with arms sales to Saudi war criminals. Avoid absurd nonsense about Iran,” Zarif said, bringing up Riyadh’s campaign in Yemen, as well as the gruesome murder of journalist Jamal Khashoggi at the Saudi consulate in Istanbul.

Reality check: YOU are destabilizing OUR region. Stop protecting criminals who chainsaw their critics and use YOUR arms to slaughter children in Yemen.

The furious remarks came in response to Le Drian’s interview with the Journal du Dimanche published on Saturday. While condemning the US stance on Tehran under President Donald Trump, the diplomat unequivocally accused Iran of heading towards nuclear weapons production.

“The Trump administration chose what it called the maximum pressure campaign on Iran. The result was that this strategy only increased the risk and the threat,” Le Drian said. “This has to stop because Iran and – I say this clearly – is in the process of acquiring nuclear [weapons] capacity.”

The French FM effectively doubled down on the accusations raised by France, Britain and Germany – the European signatories of the 2015 nuclear deal with Tehran – on the same day. The trio urged Tehran to abandon its plans to produce metal uranium – which is explicitly prohibited under the agreement – claiming the country had “no credible civilian use” for it.

Iran’s nuclear agency, however, insists that such plans are neither new nor going against the deal, officially known as the Joint Comprehensive Plan of Action (JCPOA). Metal uranium is only an “intermediate product” needed to produce “advanced” nuclear fuel, uranium silicide, the agency said in a statement.

The plans to produce such fuel, which is both safer to use and packs more of a punch than the uranium oxide-based one, have existed for around two decades already, it explained, adding that the UN’s International Atomic Energy Agency (IAEA) had been properly and repeatedly notified of them.