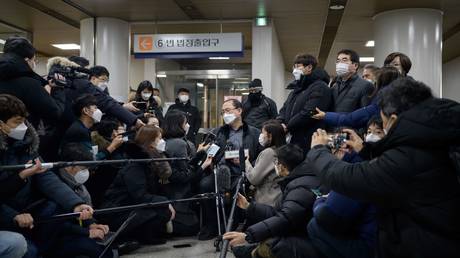 Japan’s foreign minister says a ruling by the South Korean court ordering compensation for women kept in its World War II military brothels creates an ‘unthinkable situation’ in a simmering row between the two neighboring nations.

Speaking in the Diet on Monday, Toshimitsu Motegi said the court ruling on January 8 created “an abnormal, totally unthinkable situation in terms of international law and the bilateral relationship.”

“I will continue to strongly demand an appropriate response by the South Korean side,” Motegi said. His ministry had previously summoned South Korea’s ambassador to protest the ruling.

The issue of “comfort women” has long undermined relations between Japan and South Korea. Japan says the matter was settled by a 1965 treaty that normalized relations with South Korea and provided more than $800 million in financial aid to Seoul, but many in modern South Korea deem the military dictatorship-era settlement unfair.

There was no immediate reaction from South Korean officials to Motegi’s speech, but recent relations between the two Asian neighbors have been frosty. Some 70 percent of South Koreans consumers have either stopped wearing Japanese clothing brands, refused to drink beer brewed in Japan, or shunned other consumer products and vehicles manufactured there. Meanwhile, Tokyo has removed South Korea from a list of preferential export nations.