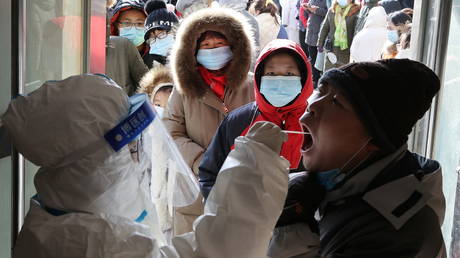 Health officials in the Chinese province of Hebei will review hundreds of thousands of Covid-19 tests carried out by third-party agencies after it was revealed that one laboratory allegedly hid positive cases of the disease.

On Thursday, Jinan Huaxi Medical Laboratory, which was hired to process coronavirus tests in Hebei’s Longyao County, said that some 310,000 samples taken from locals had returned negative results.

However, the lab reported the reassuring numbers to the county’s health commission before it had actually finished processing them all, the Global Times reported.

The inconsistencies prompted an investigation into the laboratory, with local authorities saying on Sunday that they had found two confirmed cases and one asymptomatic infection in the batch of tests it handled. The head of the company was subsequently detained by police.

Governor Xu Qin responded to the news by ordering all recent tests conducted by third-party agencies in Hebei to be reexamined for possible errors and false results. “No one should be left out and all data [must be] be authentic,” he insisted.

Hebei started mass-testing residents and introduced a strict lockdown in some areas as the province, which surrounds the capital, Beijing, became the venue of China’s largest Covid-19 outbreak in recent weeks.

Out of 109 new coronavirus cases reported by the Chinese authorities on Sunday, 54 were in Hebei.