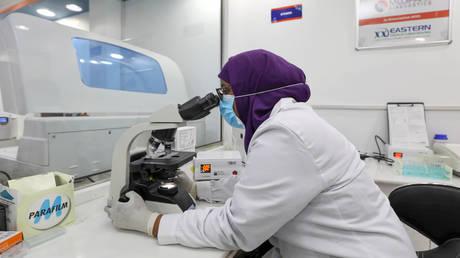 Salim Abdool Karim, co-chair of the South African Ministerial Advisory Committee on Covid-19, spoke during a video conference about the 501Y.V2 variant, and highlighted a recent study that had “kicked off his deepest concerns” about the mutation.

The variant is able to enter “more deeply” into the human cell, meaning its “ability to bind to the human cell is now stronger,” Karim said, explaining that this enables it to become a more “efficient virus in the way it transmits.”

The findings are from a preliminary study into the N501Y mutations in the spike protein of coronavirus, which has not yet been peer-reviewed and was published in a pre-print format on December 26.

South African scientists discovered the 501Y.V2 variant late last year and it has since spread to the UK and at least 20 other countries.

Karim said that the 501Y.V2 variant is 50 percent more transmissible than previous variants and that it had “spread much faster.”

He added that the B.1.1.7 variant discovered in England and known as the “UK strain” is 56 percent more transmissible than previous forms of the virus. The variant is not believed to cause a more serious illness among those who contract it.

Karim explained that, during the recent festive period, the South Africa variant was the likely cause of one in three Covid-19 tests coming back positive.

In general, the proportion of positive results from test samples has fallen in the last few weeks, he added.

On Sunday, the last day for which data is available, South Africa recorded 12,267 new infections and 254 fatalities, taking its total death toll to 37,105.