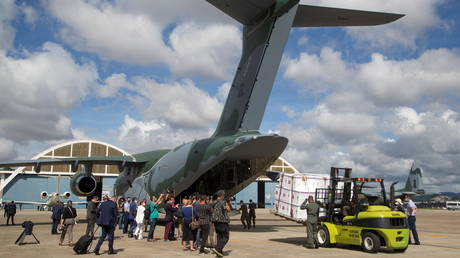 Brazil, one of the nations worst-affected by Covid-19, launched its mass-vaccination campaign on Monday. All the jabs available will be distributed among the country’s federal states.

Brazil has decided to begin its vaccination campaign ahead of schedule, shortly after the nation’s health regulator Anvisa greenlit emergency use of vaccines from China’s Sinovac and Britain’s AstraZeneca. The vaccine rollout was initially due to start on January 20 but was accelerated due to repeated calls from local governments to speed up the process.

Announcing the launch of the immunization campaign, Brazil’s health minister Eduardo Pazuello said that all the vaccines available will be distributed to the country’s federal states immediately. Military transport aviation will be involved in the distribution to ensure speedy deliveries of the jabs.

“After listening to the governors, we reached the decision that today we will still distribute all vaccines to the states, all of them,” Pazuello said, calling the launch of the vaccination campaign a “historic moment” for the country.

So far, Brazil has procured around five million doses of China’s Sinovac vaccine, set to be distributed proportionally between the states.

Brazil is the third worst coronavirus-affected nation in the world. With its Covid-19 infections tally nearing the 8.5 million mark, its toll is surpassed only by the US and India. Brazil also experienced high mortality rates, with more than 200,000 people succumbing to the coronavirus. Death toll-wise, it’s in the second place with worse absolute figures recorded only in the US.