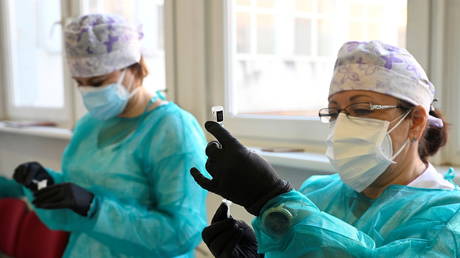 Slovakians will not be allowed to go to work or make a trip to the countryside unless they have recently tested negative for Covid-19. The rule comes into effect next week, with Bratislava hoping to ramp up testing by then.

The plan is broken down into two phases. The first, which begins on Monday and will last for a week, will see Slovakians flocking to Covid-19 testing locations, including regular and mobile testing sites, to take either an antigen or a PCR test.

From next Wednesday, January 27, Slovakians who have failed to obtain test results proving they are not infected will be effectively confined to their homes. Such routine things as traveling to the workplace, walking to the post office, or countryside trips (for those aged 15-65 years) will be off limits. Visits to the doctor and shopping for groceries are among the few exceptions from the regulations.

If the newly introduced rules are not tricky enough, those who live in one of the 37 districts with a higher rate of infections will have to go through a second round of testing. They will be exempted from the de facto curfew, to last from February 3 to February 7, only if they test negative twice. Those who live in the remaining 36 districts won’t have to repeate the procedure.

Slovakia, a nation of some 5.4 million people, has been living under a sweeping lockdown since the beginning of January. As part of the wide-ranging restrictions, any visits involving people from different households are prohibited, public church services are banned, and restaurants can serve only takeaway.

The current lockdown is set to expire on February 7. However, the government has not ruled out relaxing the measure earlier if the number of hospitalizations sinks below 2,500, according to Reuters. It currently stands at over 3,000 people.