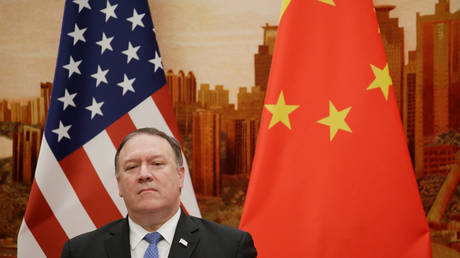 Beijing has mockingly rebuffed America’s latest round of sanctions, calling Secretary of State Mike Pompeo a “praying mantis,” as the Trump administration spends its final days targeting China over its behavior in Hong Kong.

On Friday, the US announced new sanctions on six officials in China, including Tam Yiu-chung, the Hong Kong delegate to the National People’s Congress Standing Committee, as Washington sought to punish China for arresting anti-Beijing activists.

“People like Pompeo are nothing but laughable praying mantises who are trying in vain to stop the rolling wheels of history,” China said in response to the fresh measures, declaring “Hong Kong’s development from chaos to stability is unstoppable.”

The use of the term ‘praying mantis’ refers to a Chinese idiom about an insect that pointlessly attempts to use its legs to stop a chariot. “We condemn PRC [People’s Republic of China] actions that erode Hong Kong’s freedoms and democratic processes, and will continue to use all tools at our disposable to hold those responsible to account”, Pompeo stated, defending the measures in a statement.

China’s introduction of a national security law in Hong Kong has resulted in widespread condemnation from Western nations, who see it as violation of the 1984 agreement between Beijing and London that saw the former colonial territory returned to Chinese control.

Beijing has repeatedly defended the implementation of the strict law, arguing that it is not an attempt to strip away freedom or liberties, but is necessary to ensure stability in Hong Kong. Since China launched its crackdown on those behind the widespread and violent Hong Kong protests in 2019, the US has issued a number of sanctions, including against 11 officials in August and a further 14 figures in December.