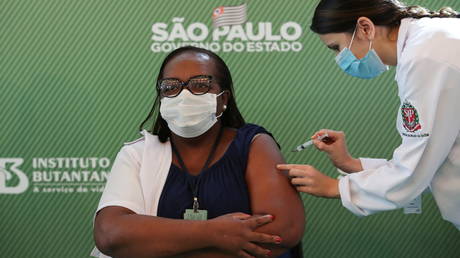 A Covid-19 vaccine developed in China has been shown to be 20 percent more effective in a small clinical trial group when doses are given three weeks apart, a spokesperson for the manufacturer, Sinovac Biotech, said on Monday.

The protection rate was 70 percent for 1,394 volunteers given either a placebo jab or the real CoronaVac vaccine 21 days apart, according to a clinical trial in Brazil, where the rollout of the vaccine has started after it was approved on Sunday.

Scientists in the South American country said last week that, based on a trial of 9,000 people, the vaccine’s efficacy was just 50.4 percent in participants given doses 14 days apart – just above the 50-percent threshold needed for approval.

Sinovac did point out that the result from the group of 1,394 was less reliable than that of the 9,000-person trial, which used data from participants receiving doses two and three weeks apart.

This is the first time that efficacy data have been released by Sinovac for CoronaVac, for which the dosing regimen differs from the original methodology used to assess the vaccine in trials.

The 50.4 percent efficacy of CoronaVac is calculated for individuals with “very mild infections” who do not need medical assistance, according to scientists at the Butantan Institute in São Paulo, where the clinical trials took place.

Researchers said that the vaccine has an efficacy of 78 percent for stopping mild Covid-19 cases requiring treatment, while it is 100-percent effective for moderate and serious cases.

As well as China and Brazil, the vaccine is being rolled out in Turkey and Indonesia, where different clinical trials found the jab to have efficacy ratings of 91.25 percent and 65.3 percent, respectively.