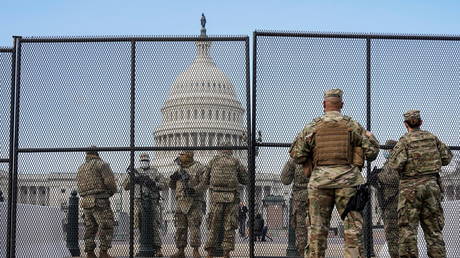 Iran’s most senior general has ridiculed the US after American armed forces and the national guard were brought in to protect Washington from any further violence during the week of Joe Biden’s inauguration as president.

“We are at the peak [of our power] today as enemies are collapsing,” said Major General Mohammad Hossein Baqeri, the chief of staff for Iran’s Armed Forces, during a ceremony on Monday.

The general also described it as ironic that the US had hoped to overthrow the Iranian government, but it was now America that was in turmoil.

“They wanted the Islamic Republic not to see the 40th anniversary of its revolution, but the building of their own Congress came under siege,” Baqeri said.

“Their officials voiced concern that their prestige is being spoiled before the eyes of the world, and now the US Armed Forces are on alert … for the swearing-in ceremony of the new president.”

Earlier in December, Iranian President Hassan Rouhani said the storming of the US Capitol building by supporters of outgoing President Donald Trump demonstrated the weakness of Western democracy.

“We saw that, unfortunately, the ground is fertile for populism, despite the advances in science and industry,” he stated.

Baqeri’s remarks on Monday follow decades of terse US-Iranian relations, which have been ratcheted up under Trump. His administration emphasized a ‘maximum pressure’ campaign against Iran, involving multiple sanctions and repeated threats of military action, as well as the assassination of Iranian Major General Qassem Soleimani on January 3, 2020.

Last week, Secretary of State Mike Pompeo claimed Al-Qaeda has established a home base in Iran, but did not provide evidence for the claim. His announcement was rubbished by Iran’s Foreign Minister Javad Zarif as “more warmongering lies.”

Trump’s unilateral withdrawal from the Iran nuclear deal in 2018, three years after it was signed by his predecessor Barack Obama, prompted Tehran to subsequently increase its nuclear enrichment program and move further away from its commitments under the deal.

On January 9, an Iranian spokesperson said the incoming Biden administration, which takes office on January 20, has until February 21 to reverse US sanctions on Iran.