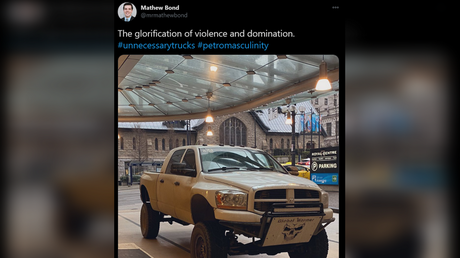 A councillor for the District of North Vancouver has incited a flanneled Twitter mob after lecturing his fellow Canadians about a pickup truck that he found to be… the embodiment of ‘violence glorification.’

Councillor Mathew Bond shared a photograph of what appears to be a White Dodge Ram with a suspension lift. To top it off, the vehicle has a large placard on the front grille that contains a skull and the phrase “global warmer.”

“The glorification of violence and domination. #unnecessarytrucks #petromasculinity,” the official quipped.

His thought-provoking hashtags do not appear to have had the intended effect, however. Countless Twitter users, many of them identifying as Canadian truck owners, hurled all manner of abuse at Bond and mocked him for his alleged lack of Canadian vitality.

Imagine having such a charmed life that one has time and energy to get angry about trucks.

The thread was also bombarded with pictures of large trucks, many of them loaded with chainsaws and other power tools, as a form of protest against Bond’s analysis.

The avalanche of negative responses prompted Bond to double-down. In a series of follow-up tweets, he argued that the hate he had received simply “reinforced” the point he was trying to make. He went on to explain that making modifications to such an automobile was dangerous and unnecessary, adding that the plate on the front of the vehicle was beyond the pale.

“Glorifying global warming when millions around the world are suffering from its impacts, is sad, harmful and disgusting,” he wrote.

He finished his sermonizing by accusing his critics of being insecure and perfectly illustrating male “toxicity.”

Unsurprisingly, this only aggravated his Twitter detractors. In fact, some observers turned the PC-tables on Bond, noting that many women drive trucks and he was wrong to assume the vehicle owner’s gender.

The only members of our family with BIG trucks are ladies. They are NOT in the slightest bit masculine

Bond was able to rally a small cadre of supporters, however. Several replies argued that large trucks are marketed towards “insecure” and “fragile” males.

Marketing trucks to insecure males is very profitable, and advertising works!
Divorced suburban dads, and out of shape me who feel victimized need a way to display some king of strength. Buying a truck is a lot easier than going to the gym and getting therapy

Bond’s province of British Columbia is a hotbed of ‘woke’ activity. The chief judge of the Provincial Court of British Columbia announced last month that lawyers and their clients must state their gender pronouns when introduced to the court, apparently to ensure that suspected criminals aren’t misgendered.