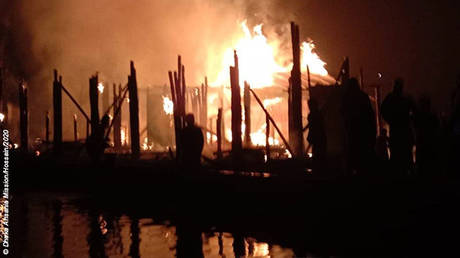 UNICEF has condemned an “arson attack” that burned down four learning centers at a Bangladeshi camp for Rohingya refugees, days after a similar blaze left thousands of the religious group homeless.

In a statement posted on UNICEF Bangladesh’s Twitter account, the group called the incident an “arson attack,” stating that it is “working with partners to assess the damages of the attack and speed up the process of rebuilding these learning centers.”

The incident further disrupts learning for over 300 already disadvantaged refugee children who have lost their education facilities. pic.twitter.com/OT02mnNw7I

The incident occurred at the Cox’s Bazar Rohingya Refugee camp, which is estimated to hold around 745,000 individuals, including more than 400,000 children, who fled Myanmar over the last few decades due to religious persecution. Bangladesh’s refugee commissioner, Razwan Hayat, rejected UNICEF’s claim, arguing that the schools were made from flammable materials and the blaze was accidental.

“We are investigating. But we think it is an accident,” Hayat stated, adding that “these centers are not permanent structures.”

The international aid organization warned that the situation will disrupt learning for 300 children who have already been forced to flee their home nation and leave their education behind.

While UNICEF have stated that the fire was started intentionally, they have not suggested who could have been behind the attack or whether it was linked to another blaze that raged through the camp. On January 14, a fire swept through the Cox’s Bazar camp, destroying 550 homes and displacing around 3,500 people, according to the aid group. The fire took several hours to put out, due to exploding gas cylinders within people’s homes, and it is believed to have destroyed all shelters and belongings in the affected section of the camp.