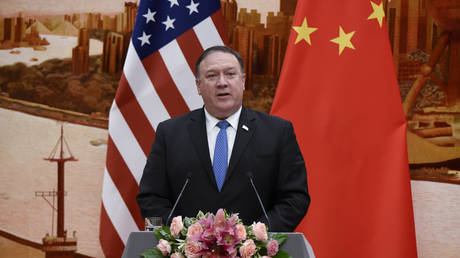 Outgoing US Secretary of State Mike Pompeo has used his last full day in office to accuse China of genocide and crimes against humanity over its alleged abuses of Uighur Muslims in its northwestern Xinjiang region.

“The PRC [People’s Republic of China] under the direction and control of the CCP [Chinese Communist Party], has committed genocide against the predominantly Muslim Uighurs,” Pompeo said in a strongly worded statement on Tuesday.

The US official said the “ongoing” genocide dates back to at least March 2017, and called it a “systematic attempt to destroy Uighurs by the Chinese party-state.”

The comments make the US the first country to describe China’s alleged human rights abuses towards the Uighur minority as “genocide.”

Pompeo claimed that China had arbitrarily imprisoned more than a million people, and accused it of forced sterilization, torture, forced labor, and “draconian restrictions” on freedom of religion.

He also called on other countries to push for the prosecution of those behind the “atrocities,” noting that the Nuremberg trials were used at the end of World War II to bring Nazi war criminals to justice for the “same crimes being perpetrated in Xinjiang.”

Beijing has repeatedly denied the accusations of having perpetrated human rights abuses on the Uighurs.

Pompeo’s comments on Tuesday mark a continuation of his aggressive stance toward China throughout his tenure as secretary of state, which has seen Washington and Beijing trade barbs over multiple issues.

On Monday, China blasted the new US sanctions imposed on six Chinese officials over the introduction of the national security law in Hong Kong, saying: “People like Pompeo are nothing but laughable praying mantises who are trying in vain to stop the rolling wheels of history.”

Beijing also said on Monday that it would sanction US officials for “performing badly” in relation to Taiwan – a reference to recent US military action near the island nation, which China views as part of its territory.

Pompeo appears set to be succeeded as secretary of state by Antony Blinken, the nominee of US President-elect Joe Biden who is due to take office on Wednesday.