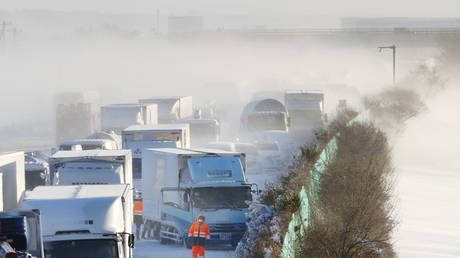 More than 130 vehicles have been involved in a pileup on a Japanese expressway, leaving one dead, after heavy snow blanketed wide areas of northern and north-eastern Japan.

The fatal crash took place around midday on Tuesday on the Tohoku Expressway in Osaki, Miyagi Prefecture, leaving one person dead and 10 others hospitalized, police and firefighters said. Heavy snowfall continues to cover large areas of northern and north-eastern Japan, creating unfavorable conditions for driving.

Videos shown on national TV show the extent of the damage caused as approximately 130 vehicles stacked up along the highway.

Rescue teams are working to free more than 200 passengers trapped in their vehicles on a 900-meter stretch of highway. Expressway operators have said visibility is near zero.

Japan Meteorological Agency has forecast more extreme weather, with Hokuriku, Tohoku and Hokkaido regions expected to record snowfalls of up to 50 centimeters, 40 cm and 30 cm, respectively.

East Japan Railway has suspended some of its shinkansen bullet train services in the Tohoku region due to the inclement weather.