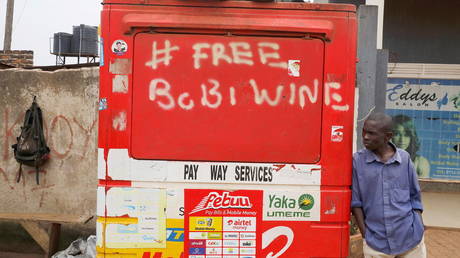 The Ugandan government has accused the US of trying to “subvert” the country’s highly contested elections, after Washington’s envoy attempted to visit opposition leader Bobi Wine, who has been placed under house arrest.

The attempted visit by US Ambassador Natalie E. Brown to the home of pop-star-turned-politician Wine, also known by his real name, Robert Kyagulanyi, invoked a furious reaction from the Ugandan authorities.

“What she has been trying to do blatantly is to meddle in Uganda’s internal politics, particularly elections, to subvert our elections and the will of the people. She shouldn’t do anything outside the diplomatic norms,” the country’s government spokesman Ofwono Opondo told Reuters on Tuesday. The official also alleged that Brown had a history of making trouble in other countries where she had worked in the past, but did not provide any examples.

READ MORE: Fresh from censoring select voices before and after US election, Twitter howls ‘HUMAN RIGHTS’ as Uganda shuts down social media

The unsuccessful attempt to visit Wine was undertaken by Brown on Monday. According to the US mission, the diplomat merely wanted to check on the “health and safety” of the opposition candidate. However, the envoy was turned away by the military, who blocked access to and from the presidential candidate’s house shortly after the Thursday election.

Wine himself has condemned the government’s interference into the failed high-profile visit, accusing the military of holding him “captive” along with his family.

This afternoon, the US Ambassador to Uganda made an effort to visit me but was turned away from my gate by the soldiers who have held me and my wife captive for the past five days.

According to official figures, the election was won by the incumbent President Yoweri Museveni, who has remained in power since the late 1980s. Museveni scored some 59 percent of the votes, leaving Wine, with his 35 percent support, far behind. The opposition has rejected the result, however, accusing the government of grossly falsifying it and of rigging the polls.

Apart from blocking Wine in his house, the security forces have also cordoned off his party’s offices in the capital, Kampala. The opposition claimed the move was aimed at disrupting the party’s work to collect proof of the alleged election-rigging.

The government has strongly denied that there had been any rigging of the polls. “This is what we expected before. Even before we went into polling, [Wine] said the election will be rigged,” the government spokesman said shortly after the polls, which have not been observed by US or EU officials.