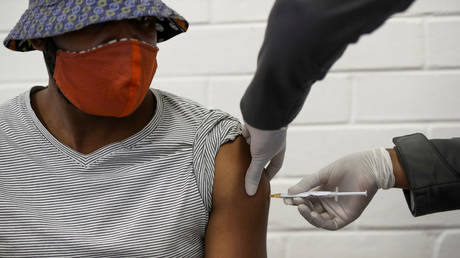 An independent WHO panel studying the handling of the Covid-19 pandemic has criticized global vaccine rollout plans over inequalities that will see most of Africa missing out on receiving any jabs this year.

“The panel is discouraged and frankly disappointed by the unequal plans for vaccine rollout,” panel co-chair Ellen Johnson Sirleaf, the former Liberian president and Nobel Peace Prize winner, told an Executive Board meeting of the World Health Organization (WHO).

As things stand now, large-scale distribution of vaccines against the coronavirus won’t begin in Africa until 2022 or even 2023, she pointed out.

Since the start of the pandemic, the African continent has been one of the least affected areas, with just over 2.3 million infections and around 53,000 deaths due to the virus, according to WHO data. However, the low numbers are attributed not only to Africa’s vast experience of dealing with infection diseases, but also to the poor state of healthcare in many countries and a severe lack of testing.

Johnson Sirleaf’s worlds echoed those of the WHO chief, Tedros Adhanom Ghebreyesus, who said on Monday that the hoarding of vaccines by richer countries put the world “on the brink of a catastrophic moral failure.”

“Not only does this me-first approach leave the world’s poorest and most vulnerable at risk, but it is also self-defeating” as it prolongs the pandemic, he pointed out.

Internal papers seen by Reuters last month suggested that the WHO’s global program to deliver Covid-19 vaccines to poor countries, COVAX, was at high risk of failure due to lack of funding and overly complicated contractual agreements.

The program aims to provide 2 billion doses of vaccines to Africa, Asia and Latin America by the end of this year – but it may well turn out that people there will have to wait for the supplies until at least 2024, the documents revealed.

On Tuesday, the EU health commissioner, Stella Kyriakides, announced that the bloc was considering sharing its surplus of vaccines with Africa.

With a population of 450 million, the European Union has already clocked up almost 2.3 billion doses of various vaccines.Kyriakides said that the plan was to deliver vaccines to poorer countries “before COVAX is fully operational.”