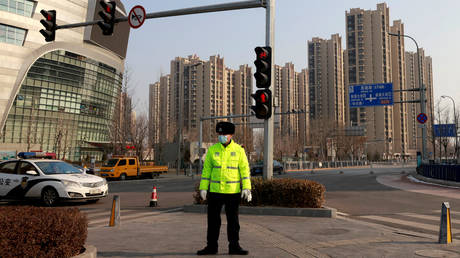 A partial lockdown has been imposed in China’s capital, specifically its southern district of Daxing, which has registered a new Covid-19 outbreak. The 1.6 million residents of the area have been banned from leaving the city.

The lockdown was triggered by the detection of seven new coronavirus cases in Beijing on Wednesday, six of them originating from Daxing, a sprawling district in the south of the city housing one of its two international airports. In all, 103 new cases were detected across China that day.

Daxing residents have been ordered to stay home and are banned from leaving the city unless they have special permission from the authorities and have tested negative for the virus over the past three days. Gatherings of more than 50 people have been banned, while such events as “weddings should be postponed and funerals simplified.” Public transportation in the district has been ordered to cap its passenger flows at 75 percent of full capacity.

In the Tiangongyuan subdistrict, where the new cases were detected, the newly introduced restrictive measures were even tougher. All public places in the subdistrict are required to close until further notice.

While China has largely brought its coronavirus situation under control, and still has fewer than 100,000 cases registered, it has repeatedly seen small-scale outbreaks in recent weeks. Detection of even minor clusters of the virus has been prompting massive lockdowns and even snap construction of emergency isolation facilities across the country.

On Monday, for instance, some three million people were placed on lockdown in northeastern Jilin province, after more than a hundred people contracted the virus from a traveling salesman. As millions of Chinese prepare to travel home for the upcoming Lunar New Year holidays, it’s thought a surge in cases could be triggered.