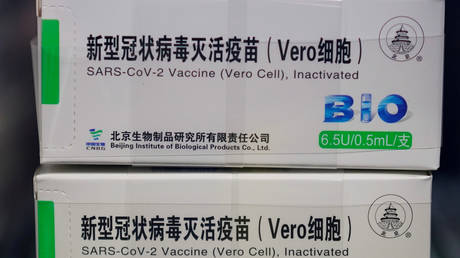 Three of China’s vaccine-makers have applied to join an initiative by the World Health Organization (WHO) initiative to ensure “fair” distribution of Covid-19 vaccines around the world.

Pharmaceutical companies Sinovac, Sinopharm, and CanSinoBIO, each of which has developed its own vaccine, have filed applications to join the WHO’s COVAX initiative, China’s Foreign Ministry spokesperson Hua Chunying has announced.

“We have always maintained that viruses know no borders, and that mankind shares a common destiny,” Hua said. “Solidarity and co-operation are the most powerful weapons against the pandemic.”

The COVAX plan aims to ensure all countries, including poorer nations, have “fair and equitable” access to vaccine.

“Meeting the vaccine needs of countries, especially developing countries, requires the joints efforts of the international community,” Hua said, urging every leader to “promote equitable distribution of vaccine around the world.”

Speaking to reporters at a daily press briefing, Hua noted that the Chinese-made vaccines were approved for use in countries such as Brazil, Turkey, Indonesia, Jordan, Egypt, Bahrain, and the UAE.