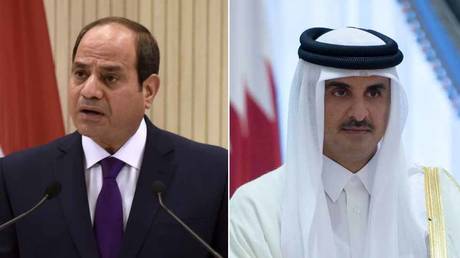 Cairo has formally agreed to resume diplomatic relations with Qatar after it ended a three-year boycott launched in partnership with Bahrain, Saudi Arabia and the UAE over allegations that Doha supported terrorism.

Qatar repeatedly denied the accusations. Although all four nations have now ceased their boycott of Qatar, Egypt is the first to take the official step in an attempt to restart its relationship with the Gulf state.

A statement released by the Egyptian Foreign Ministry on Wednesday declared: “The Arab Republic of Egypt and the State of Qatar exchanged, today, January 20, 2021, two official memoranda, in virtue of which the two countries agreed to resume diplomatic relations.”

The relationship between Egypt and Qatar broke down after Cairo accused Doha of failing to cut ties with the Muslim Brotherhood, an Islamist group outlawed in Egypt after then-president Mohamed Morsi and his party were overthrown and removed from power. In order to placate Cairo, Doha has pledged to not interfere in Egypt’s domestic affairs.

Last week, Saudi Arabia announced plans to reopen its embassy in Doha, as it also seeks to reestablish diplomatic relations. However, it is not yet clear when or whether Bahrain and the UAE will follow suit.

The agreement to end the boycott in the region was one of the last foreign policy moves by the Trump administration, which oversaw the talks.