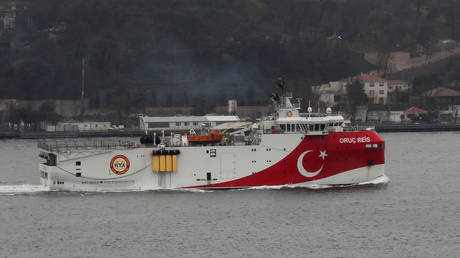 The Greek prime minister said he has “optimism, confidence, and hope” ahead of a meeting with his Turkish counterparts next week, but claimed there would be “zero naïvety” from Athens as the two sides tussle over contested waters.

Speaking on Wednesday, Prime Minister Kyriakos Mitsotakis said Greece would discuss only the demarcation of maritime zones in the Aegean and the Mediterranean, and would not be drawn into negotiations on national sovereignty with Turkey.

“We approach exploratory contacts with optimism, confidence, and hope, but also with zero naïvety,” Mitsotakis said, adding that discussions will be informal and non-binding, and will concern only one Greek-Turkish dispute.

“No discussion can concern national sovereignty and the rights of the country, nor can it challenge international treaties,” the prime minister asserted.

Mitsotakis noted that if the two sides failed to reach an agreement over contested and potential hydrocarbon-rich waters, the dispute would be referred to an international court.

Greece wishes to conclude matters relating to maritime demarcations only to avoid further dispute, while Turkey is keen to discuss a broader array of issues, including air space and the status of some Aegean islands.

The two nations have been at loggerheads in recent years, as they disagree on exploration rights in the Eastern Mediterranean.

Ankara’s unilateral decision to send exploration vessels into contested waters has angered Athens and its allies. The EU has repeatedly threatened sanctions unless Ankara desists.