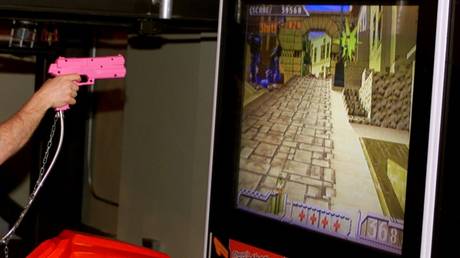 Being a border guard at the Karakoram Range more than 5,000 meters above sea level is no easy task, so the Chinese military has installed a makeshift arcade to somehow sweeten the harsh service conditions for its troops.

The entertainment tent, erected at a combined arms regiment under Xinjiang Military Command, was equipped with a whole range of arcade machines that would make the heart of every gamer beat faster.

There are dance and basketball machines, racing simulators, fighting and shooting arcades, among other attractions.

The hi-tech mess tent also provides the servicemen with an opportunity to play chess and poker or engage in traditional Chinese cultural activities, like calligraphy and painting.

#PLA plateau border defense troops stationed in Karakorum get to play arcade games after finishing training missions. Chinese netizens said they are relieved to see the troops are living in good conditions and can strike a balance between work and rest. https://t.co/9YzXEKZ29G pic.twitter.com/FLx08kXCI7

Temperatures at Karakoram may fall below minus 30 Celsius, with the snow cover sometimes reaching two meters, but the “troops are not afraid of the hardship,” Jin Xin, who is in charge of political work at the regiment, told Chinese media.

The commanders “need to do our best to provide a comfortable environment and ease their worries, so they can devote themselves to training and preparing for combat without distraction,” Jin said, explaining the decision to set up what must be one of the most elevated arcade cabinets in the world.

Another reason for the troops getting such special treatment might be that Karakoram is at a strategic area, where the borders of China, India and Pakistan come together.

The soldiers were, of course, excited with the innovation. “With a good rest, we are more ready for training and combat,” one of them said.

The same Chinese military that has now organized a games arcade for its troops only a few years ago sounded the alarm over gaming addiction among its ranks. Its official paper, People’s Liberation Army Daily, wrote back in 2017 that popular Chinese-made online game ‘Honour of Kings’ had “infiltrated” the lives of too many soldiers and officers.

“Over-addiction to mobile phone games is gradually harming [their] physical and psychological health… It even poses a threat to security management and could undermine combat capability,” the article read.