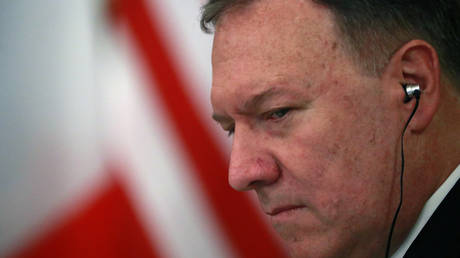 China has imposed sanctions on 28 US figures, including former Secretary of State Mike Pompeo and other allies of former President Donald Trump, over their alleged violations of China’s sovereignty and interference in its affairs.

The sanctions ban the 28 individuals and their family from entering mainland China, Hong Kong and the autonomous region of Macao, while companies associated with them are also banned from doing business with China.

Announcing the sanctions on the same day Trump’s successor was sworn into office, the Chinese foreign ministry said in a statement that those blacklisted included “anti-China politicians” who have displayed “selfish political interests and prejudice and hatred against China.”

It also claims those listed have contributed to a “series of crazy moves which have gravely interfered in China’s internal affairs, undermined China’s interests, offended the Chinese people, and seriously disrupted China-US relations.”

Those sanctioned include Trump’s former campaign strategist Steve Bannon, who the outgoing president pardoned in his final hours in office, as well as John Bolton, Trump’s ex-national security adviser.

The sanctions continue the dire downturn in China-US relations during Trumps’ tenure, which had plummeted to new depths in recent days.

China’s foreign ministry spokesperson Hua Chunying accused Pompeo of “venomous lies” on Wednesday, calling him a “doomed clown and a joke of the century” after the US official accused China of “genocide” against Uighur Muslims on Tuesday. Pompeo also urged international courts to hold those responsible for the “atrocities” accountable.

Beijing and Washington have also recently sparred over a number of other issues, including China’s imposition of its national security law in Hong Kong, the sovereignty of Taiwan, and several trade disputes. The Trump administration also recently imposed a string of sanctions against Chinese officials for their alleged role in cracking down on protesters in Hong Kong.