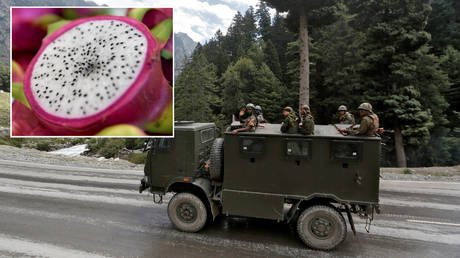 As border tensions with China run high, the Indian state of Gujarat has decided that dragon fruit needs to be rebranded because its current moniker is too closely associated with its neighbor to the north.

Gujarat’s chief minister, Vijay Rupani, has announced that the fruit will be renamed “Kamalam” in the state because the original name “is associated with China.”

The new name is the Sanskrit word for “lotus” and Rupani explained that it was chosen because the fruit resembles the flower. It’s likely more than a coincidence that the lotus also happens to be the national flower of India and the symbol of the country’s ruling Bharatiya Janata Party.

“The state government has decided [to] rename the dragon fruit. As the outer shape of the fruit resembles a lotus, hence dragon fruit shall be renamed as Kamalam,” Rupani said, according to the ANI news agency.

“The name of dragon fruit [is] associated with China and we have changed it,” he added.

HAHAHAHA, can’t believe this is serious. They really have the priorities sorted.

What’s next? Are you renaming Banana also? ? https://t.co/oUMaSjkLMo

The news quickly sparked an outbreak of fruit-throwing on Twitter as people raised questions about the priorities of the Gujarat government.

Not even Orwell’s fertile imagination could dream up the kind of bizarre government actions this nation is witnessing. pic.twitter.com/uYa8tlapTs

“We were not satisfied renaming the cities, we need to rename vegetables & fruits too. By the way, Covid is on, the economy took a hit, we are in the middle of a pandemic. Just saying,” popular TV chef Kunal Kapur wrote.

Gujarat Govt. renames #dragonfruit as ‘Kamalam’. Looks like our priority for the nation is set! We were not satisfied renaming the cities, we need to rename vegetables & fruits too. By the way, COVID is on, the economy took a hit, we are in the middle of a pandemic. #JustSaying https://t.co/bmOcuY63Jz

Political opponents were also quick to get quips in. “Hallelujah! The dragon has been shown its place… oh wait, I meant dragonfruit,” joked Priyanka Chaturvedi of the Shiv Sena party. “The dragon has been slayed,” added Karti Chidambaram from the Indian National Congress.

The Dragon has been slayed! https://t.co/k5QAGx9uO4

Relations between India and China have deteriorated in the past year as the issue of the long-disputed border in the Himalayan region again reared its head.

I urge @vijayrupanibjp Sir & @BJP4India to please rename this ‘DragonFly’ to ‘KamalaMakkhi’
It will help solve the greatest issues of the Mankind.@CMOGuj please let us know whats the procedure to sanction this change.#dragonfruit #Kamalam #KamalamMakkhi pic.twitter.com/HHwVC3siFk

The two powers are competing to build infrastructure along the border and both countries have accused each other of violating the Line of Actual Control (LAC). Last year saw the first fatal confrontation between the two sides since 1975.

It’s not the first time food has been renamed for political reasons. Perhaps the most famous recent example was the ill-fated rebrand of French fries as ‘Freedom fries’ in the United States, due to France’s opposition to America’s war in Iraq.

French fries and French toast were renamed in the House of Representatives for three years before the name change was quietly reversed as opposition to the war became widespread.