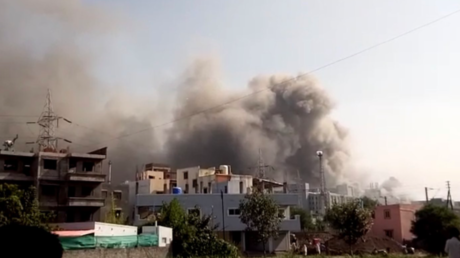 A fire has broken out at a production facility belonging to the world’s largest vaccine producer, the Serum Institute of India (SII). The company’s management has said Covid vaccine production hasn’t been impacted, however.

On Thursday afternoon, emergency services were called to an SII plant in Pune, after a fire broke out on the fifth floor.

Executive Director Suresh Jadhav confirmed the facility in question is used for the production of a BCG vaccine – an inoculation used primarily against tuberculosis.

Looks like a major fire at the Serum Institute of India, the manufacturer of the Covishield vaccine. Hope everyone is safe.
pic.twitter.com/4h92dx9WTO

SII is the world’s largest vaccine manufacturer and is currently mass-producing AstraZeneca’s Covid-19 jab, Covishield. Jadhav confirmed that the facility where Covishield vaccine is being manufactured is far away from the fire.

The mayor of Pune, Murlidhar Mohol, said a call had been received at 2.50pm local time alerting the authorities to the fire. He said 10 fire engines and at least two extra tankers had been rushed to the incident.

The rescue operation is ongoing according to chief fire officer, PMC, Prashant Ranpise.

“There were four people inside the building. We have rescued three persons so far, although smoke is hampering the work. The fire has so far spread to the third, fourth and the fifth floors. We have sent ten fire tenders so far,” Ranpise told reporters.

Fire breaks out on 2nd floor of Serum Institute of India, Pune. 10 fire tenders have rushed to the spot.