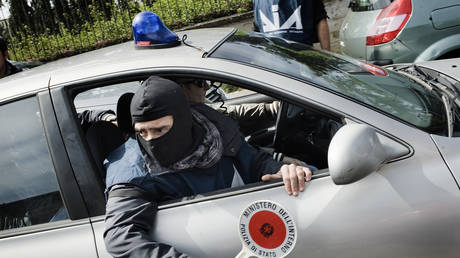 Anti-mafia police carried out sweeping early-morning raids against Italy’s most powerful mafia, the ‘Ndrangheta, on Thursday, arresting 48 people and placing the leader of a political party under investigation.

Officers from the Direzione Investigativa AntiMafia (DIA) immediately jailed 13 people, while 35 were placed under house arrest, with multiple politicians, low-level mob bosses and businessmen among those detained, according to local media.

The crackdown on the organized crime syndicate, based in Calabria, southern Italy, primarily targeted the economic arm of its operations, which prosecutors said had been exposed in its money-laundering and attempts to buy political influence.

“This investigation makes clear what we have been saying for decades. The ‘Ndrangheta shoots less and has more and more ties with business and politics,” prosecutor Nicola Gratteri, told reporters.

As part of the mafia crackdown, police have opened an investigation into Lorenzo Cesa, head of the small Christian Union of the Centre political party, over his alleged procurement of contracts for the mafia in return for favors.

DIA officers raided the former MEP’s house in Rome at dawn on Thursday, according to la Repubblica. The politician has resigned as head of the centrist party with immediate effect, saying he had been advised that the investigation relates to events dating back to 2017.

Gratteri said that a local head honcho of the ‘Ndrangheta was also among the arrests, claiming that police raids on the suspect’s house had uncovered “hundreds of millions in cash which they have not yet finished counting, dozens of Rolexes and luxury cars.”

The operation follows the opening of a “maxi trial” of 355 suspected mobsters and their associates, which began in Calabria last week and is the country’s largest mafia trial for at least 30 years.

With a reported 6,000 members in Calabria, and more in other countries, the ‘Ndrangheta has superseded Sicily’s Cosa Nostra mafia as Italy’s most powerful criminal group, and one of the most influential in the world.