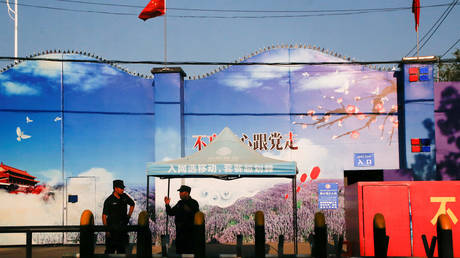 Twitter has locked the Chinese Embassy to the US out of its account for supposedly violating its policy against dehumanization with a tweet defending its activities in Xinjiang, just weeks after suspending US President Trump.

The tech giant has locked @ChineseEmbinUS, the official account of Beijing’s US Embassy, for supposedly violating its policies against dehumanization by refusing to delete a tweet defending the government’s policies regarding Uyghur Muslims in the Xinjiang region. A Twitter spokesman confirmed on Wednesday that the account was still locked.

The tweet, which said Uyghur women were no longer “baby-making machines” thanks to the Chinese government’s work in “eradicating extremism” in Xinjiang and had instead become “more confident and independent,” had already been hidden since January 8 behind a “this tweet is no longer available” notice. However, Twitter requires the embassy to delete it manually in order to unlock the account. The embassy tweeted several times after making the offending post, which remained viewable for at least 24 hours before it was censored.

Chinese media had previously skewered Twitter’s response to the tweet as “hypocrisy,” and other tweets that remain viewable also defend its policies regarding the Uyghurs. One post shows a graph depicting the minority’s population growing more than 25 percent from 2010 to 2018, and another explains the details of Beijing’s “family planning policy in Xinjiang.” China has defended its Uyghur policy as countering extremism in the region, where the US in November stripped the Eastern Turkistan Islamic Movement (ETIM) – a militant religious organization – of its terrorist designation.

Does #Xinjiang really have forced sterilization policy? Find out what real scholars in #Xinjiang have to say:
?https://t.co/WbVtkxihr3 pic.twitter.com/cs4ARqeAkD

Twitter has permitted critics of Beijing – including former US Secretary of State Mike Pompeo, whom the Chinese government recently sanctioned for “interfering in China’s internal affairs” – to accuse it of conducting “genocide” in the region, supposedly by forcibly sterilizing Uyghur women. Biden’s incoming Secretary of State Antony Blinken stated he agreed with that view during his confirmation hearings on Tuesday. The microblogging platform bans the “dehumanization of a group of people based on their religion, caste, age, disability, serious disease, national origin, race, or ethnicity.”

While it’s not clear whether Twitter hid the embassy’s post due to other users’ reports or of its own volition, the company’s decision to lock the account coincided with a significant platformwide crackdown that saw former US President Donald Trump’s hugely popular account suspended for supposedly inciting violence after his supporters staged a ‘raid’ on the Capitol earlier this month. Thousands of accounts have been deleted since then, with Trump supporters claiming to be among the hardest hit.

While Twitter is banned in China, the government maintains accounts there and on other western social media sites meant for foreign audiences. The platform has no history of locking Chinese government accounts, triggering speculations that the timing of the move suggests an effort to appear fair in its increased censorship.