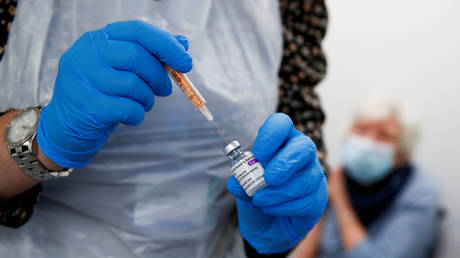 AstraZeneca has warned the EU’s executive that there will be delays to its delivery of Covid-19 vaccines in the first three months of the year, prompting the bloc’s health commissioner to express “deep dissatisfaction.”

In a series of tweets late Friday, EU Commissioner for Health Stella Kyriakides said the delays had been revealed by representatives for the British-Swedish pharma firm earlier that day “compared to the forecast for the first quarter of this year.”

“The EU Commission and Member States expressed deep dissatisfaction with this,” she added.

We insisted on a precise delivery schedule on the basis of which Member States should be planning their vaccination programs, subject to the granting of a conditional marketing authorization.

The @EU_Commission will continue to insist with @AstraZeneca on measures to increase predictability and stability of deliveries, and acceleration of the distribution of doses/3.

EU regulators have not yet approved the vaccine, jointly developed by AstraZeneca and the UK’s Oxford University, but the bloc has pre-ordered up to 400 million doses, of which about 80 million were due to be delivered by March.

A senior EU official told Reuters that the reduced figure means a drop of 60 percent in the delivery for that period, to 31 million doses.

The European Medicines Agency’s decision on approving the conditional marketing authorization of the vaccine could be made before the end of this month. Clinical trials have reported it has a 94.5 percent efficacy against Covid-19.

The AstraZeneca inoculation is relatively easier to handle than some others given it can be stored at 2-8 degrees Celsius, compared to Sputnik V’s -18C, Moderna’s -20C, and Pfizer’s -70C.

News of the AstraZenca hiccup comes after the EU said it was seeking “clarification” from Pfizer over further reductions to its deliveries, having previously announced a fall in deliveries as it works to upgrade manufacturing capacity in Belgium.