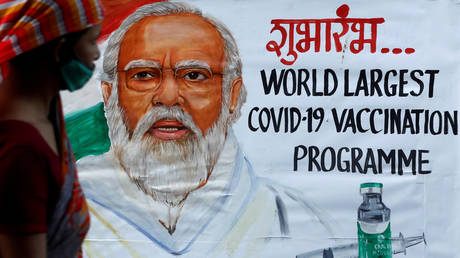 The Indian prime minister has talked up his country’s capacity to overcome the coronavirus pandemic using indigenous vaccines and those manufactured in the world’s second most populous nation.

Speaking on Friday to Covid-19 vaccine beneficiaries and vaccinators in Varanasi, Indian Prime Minister Narendra Modi praised the country’s resolve against Covid-19 and its capacity to develop indigenous vaccines to change the course of the pandemic.

“The biggest vaccination programme in the world is going on in our country. Today, the nation has the will power to manufacture its own vaccine – not one but two Made in India vaccines. Vaccines are reaching every corner of the country. India is absolutely self-reliant in this regard,” Modi said.

The prime minister added that India is also providing Covid-19 vaccines to several countries as well, including Brazil, Morocco, and the Seychelles.

India is the world’s largest vaccine producer, manufacturing around 60 percent of the world’s vaccine supply. The nation is taking the lead in production of Covid-19 vaccines too, manufacturing both AstraZeneca’s jab and a homegrown vaccine, Covaxin, made by pharma company Bharat Biotech, both of which have been approved for use in India.

Only Covishield, the local name for AstraZeneca’s jab, has been exported from India so far, some as gifts.

Modi continued to emphasize that the vaccines being offered to the Indian people are perfectly safe and effective, noting some hesitancy among the population to get inoculated.

“Earlier, there was pressure on me about when the vaccine will come. I said that it is not political people to decide on it and the decision rests with scientists. The vaccines have now come out after thorough research by our scientists,” he stated.

There was widespread concern on Thursday after a fire ripped through a production facility belonging to the world’s largest vaccine maker, the Serum Institute of India (SII), killing five.

It was later confirmed that production of Covishield was unaffected.