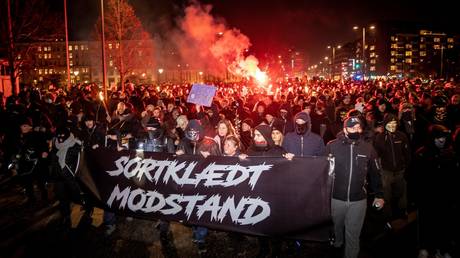 Crowds of black-clad protesters have taken to the streets, launching fireworks, torching an effigy of Prime Minister Mette Frederiksen, and clashing with cops.

Hundreds of black-clad protesters clashed with police on the streets of Copenhagen on Saturday night, shooting fireworks at the officers and getting batons in return. Violent demonstrations have become a weekly occurrence in the Danish capital, where lockdown measures were extended at the beginning of the year and where the government recently clamped down further on the size of gatherings permitted.

The group, calling themselves the ‘Men in Black’, torched an effigy of Danish Prime Minister Mette Frederiksen. By the end of the night, at least five people were arrested, Copenhagen police said on Twitter.

However, any festive mood was soon broken when clashes broke out. Armored riot police could be seen chasing and tackling some protesters to the ground as sirens echoed overhead.

Similar scenes were reported two weeks ago, when police arrested nine protesters in Copenhagen, after being pelted with fireworks and empty bottles.

Amid the lockdown, Denmark is pressing ahead with a program of mass vaccination. As of last week, around 2.5 percent of the country’s 5.8 million residents have been vaccinated. Nearly 195,000 cases of Covid-19 have been reported in Denmark, along with 1,970 deaths, according to figures from Johns Hopkins University.

Cases in Denmark have declined steadily from their mid-December high of around 4,000 per day, though deaths have continued to track upwards. As the vaccination program continues, the Danish Health Ministry announced plans to roll out a digital ‘vaccine passport’ early this year.