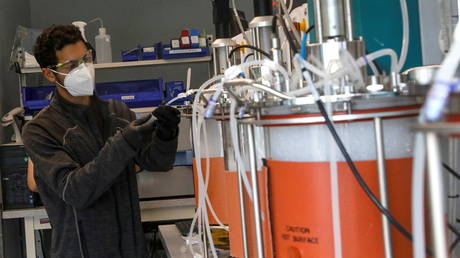 The German government has purchased 200,000 doses of the drug which was used to treat then-President Donald Trump during his brief stint at a hospital in the wake of a positive Covid-19 test.

“Starting next week, the monoclonal antibodies will be used in Germany as the first country in the EU. Initially in university clinics,” German Health Minister Jens Spahn said in an interview with Bild am Sonntag, which was published on Sunday.

The drug is produced by the biotech lab Regeneron, which is based in the state of New York, from proteins produced by mice bioengineered to mimic a human immune system. It helps neutralize viral particles in a body, helping the organism beat the infection.

It is supposed to be used for emergency intervention, protecting high-risk patients from serious symptoms and administered after a Covid-19 case is confirmed. Trump was arguably the most famous recipient of the treatment, which he received at the Walter Reed Hospital after testing positive.

The drug called REGN-COV2 remains experimental and quite costly. The US media estimated that the doses supplied under a contract with the US government would cost anywhere between $1,500 and $6,500 per treatment. Spahn said Germany paid €400 million for 200,000 doses, which translates into a price tag of $2,400 per dose.

The news comes as the German government is being criticized for the slower-than-expected rollout of Covid-19 vaccines. The minister suggested that the Germans “should be careful that 2021 does not become the year of blame” and said politicians and the public shared responsibility for the high infection rates the country experiences today.