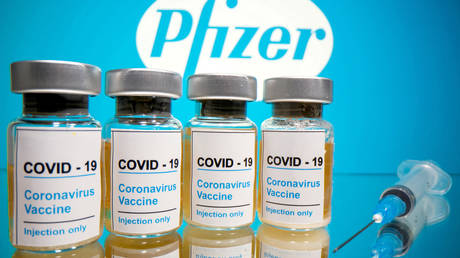 Australia has approved the Pfizer/BioNTech Covid-19 vaccine for use, making it the first country in the world to complete a comprehensive approval of the jab, but warned that supply issues could impact its distribution.

The announcement from the Therapeutic Goods Administration (TGA) was celebrated by the government on Monday, with the country’s first Covid-19 vaccine approval coming exactly one year since the first case of the virus was detected in the nation.

Prime Minister Scott Morrison took to Twitter to announce the provisional approval of the Pfizer/BioNTech drug for use in Australia, describing it as “an important step in our fight against this terrible virus.”

The TGA has today provisionally approved the Pfizer/BioNTech #COVID19 vaccine for use in Australia. This is an important step in our fight against this terrible virus. Read more: https://t.co/Mjkzhj7RUy

While other countries swiftly granted emergency authorization for the use of the Pfizer/BioNTech Covid-19 vaccine, Australia conducted a more comprehensive review of the drug. The TGA’s approach allows the Oceania nation to distribute and sell the jabs for up to two years, and, in their words, gives Australians confidence that the drug was subjected to a “rigorous” review process “of the highest standard.”

The government is currently planning to begin vaccinating people at a rate of 80,000 jabs per week by late February, according to Health Minister Greg Hunt. The TGA has issued information on the Department of Health’s website explaining what the next steps will be and who falls into which vaccine priority groups.

Now that the Therapeutic Goods Administration (TGA) has approved the Pfizer/BioNTech COVID-19 vaccine for use in Australia, find out what happens next before the vaccine is made available to our priority groups: https://t.co/MOM9rvrq8S @TGAgovau pic.twitter.com/xzEVv0J8ik

However, Pfizer/BioNTech has warned that it has been experiencing supply chain issues that could hamper distribution in Australia and other nations where the doses have been approved. The company has informed Australia that it anticipates it will be able to keep supplying vaccines but it will only be able to provide information about its global production levels “on a weekly basis.”

The AstraZeneca vaccine, which is still awaiting approval in Australia, has faced similar problems with its ability to meet demand. The company informed the European Union that deliveries to member states could fall by 60 percent in the first quarter of 2021 and warned Australia that “a significant supply shock” could reduce its planned supply to the country in March.