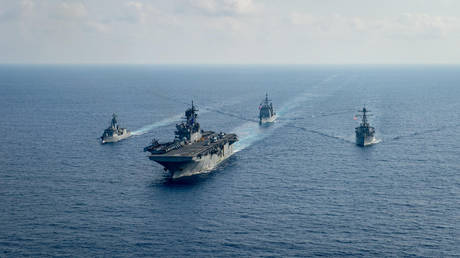 On Monday, Chinese Foreign Ministry spokesman, Zhao Lijian, told reporters that Washington’s South East Asia policy was not conducive to “peace and stability” in the region.

“The United States frequently sends aircraft and vessels into the South China Sea to flex its muscles. This is not conducive to peace and stability in the region,” Zhao said.

The foreign ministry spokesman also contended that the US should rethink its approach to Taiwan and refrain from sending any wrong signals to “Taiwan independence” movements.

Zhao urged Washington to abide by the one-China principle and not take actions that would damage Sino-US relations and peace and stability across the Taiwan Strait.

The comments come after a US carrier group led by the USS Theodore Roosevelt and three warships entered the South China Sea on Saturday. The US military said the move was to promote “freedom of the seas,” just days after President Joe Biden took office.

Also on Saturday, Taiwan’s Defense Ministry claimed that 13 Chinese warplanes had crossed into its airspace.

The administration of former US President Donald Trump saw tensions soar between the two superpowers. Beijing has urged the Biden administration to adopt a new approach and engage in more dialogue with China.