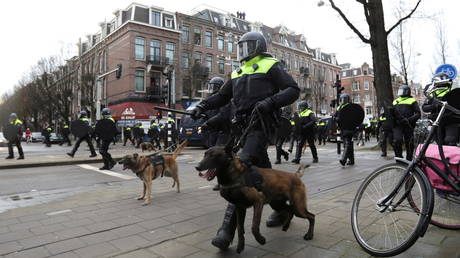 The freshly imposed and poorly received nighttime curfew must stay to curb the spread of Covid-19, Dutch PM Mark Rutte has said, condemning protests against it as “criminal violence” and vowing to treat participants accordingly.

The new restrictions came into force over the weekend, triggering a wave of violent protests across the Netherlands. Speaking to reporters in The Hague on Monday, Rutte condemned the unrest, insisting it was not a proper protest.

“This has nothing to do with protest, this is criminal violence and we will treat it as such,” Rutte stated, as he reiterated the need for the restrictions.

The country entered its very first curfew since WWII on Saturday night. The rules have been immediately broken at several locations, with the protesters even torching a Covid-19 testing site.

The violence grew throughout Sunday and spread across the country. In the capital city of Amsterdam, an unauthorized mass protest promptly devolved into clashes between the anti-curfew crowd and law enforcement, with protesters attempting to erect barricades in the streets, setting objects on fire, and pelting the officers with various projectiles.

The police response across the Netherlands was robust, with multiple water cannons, mounted police, and canine units deployed against the crowds. Hundreds of protesters have been arrested in the aftermath of the turmoil.

While Netherlands authorities employed a more relaxed approach to handling the pandemic compared to most countries around the world throughout 2020, the situation changed back in December, when Covid-19 cases rose and the government began to roll out stricter measures.

The coronavirus tally in the country, whose population stands at over 17 million, is steadily approaching the one million mark, while over 13,500 people have already succumbed to the disease.