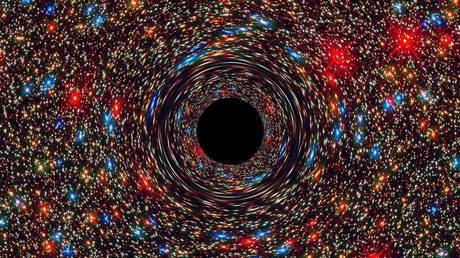 Fresh research has suggested the existence of black holes that are even more gigantic than anything previously envisioned. The boffins behind the breakthrough have dubbed the extraordinary objects ‘stupendously large black holes’.

The hypothetical black holes would weigh in at more than 100 billion times the mass of the Sun. A team of researchers from the Queen Mary University of London say these SLABs could provide researchers with a powerful tool for understanding the early universe.

Current theories suggest that supermassive black holes grow to such remarkable sizes by swallowing stars and gas from their surroundings or merging with other black holes. SLABs, on the other hand, would date back to the early universe, long before galaxies came into existence.

As these ‘primordial’ black holes aren’t formed from a collapsing star they could grow to a wide range of sizes, from very small up to stupendously large.

“We already know that black holes exist over a vast range of masses, with a supermassive black hole of four million solar masses residing at the centre of our own galaxy,” explained astronomer Bernard Carr of Queen Mary University of London.

“Whilst there isn’t currently evidence for the existence of SLABs, it’s conceivable that they could exist and they might also reside outside galaxies in intergalactic space, with interesting observational consequences.”

These black holes from the dawn of the universe could even be a candidate for explaining dark matter, which is believed to make up a large percentage of the universe that we can’t actually see.

“SLABs themselves could not provide the dark matter,” Carr said. “But if they exist at all, it would have important implications for the early universe and would make it plausible that lighter primordial black holes might do so.”

The team’s research was published in the Monthly Notices of the Royal Astronomical Society.