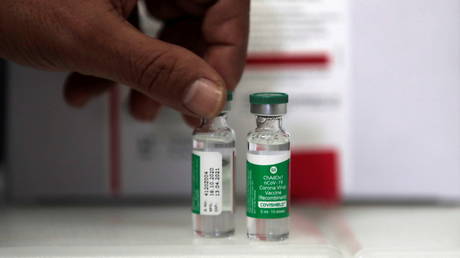 Beijing has said nations should put aside their rivalry in matters relating to Covid-19 and work together to ensure a vaccine reaches as many as possible. The comments come after India gifted the jab to regional counterparts.

“The virus is the common enemy of mankind, and the top priority of the international community is to unite and fight the epidemic together,” Zhao told journalists, insisting that the new British variant is a global challenge.

“At present, there are many new coronavirus vaccines on the market around the world. Each country should be able to independently decide which vaccine they want,” he said.

“There should be no vicious competition on this issue, let alone the so-called confrontation.”

Zhao added that Beijing welcomes the development and production of safe and efficient vaccines around the world.

Chinese state-affiliated news agency the Global Times has criticized New Delhi for supposedly engaging in ‘vaccine diplomacy’ after it emerged that India was gifting millions of doses to nations across Asia, including Afghanistan, Pakistan and Sri Lanka.

The Global Times also questioned India’s ability to produce a high-quality vaccine after a fire at the Serum Institute of India’s plant last week, where a BCG vaccine – an inoculation used primarily against tuberculosis – is being produced. The agency also reported that Indians in China are embracing Chinese-made vaccines.

India is the world’s largest vaccine manufacturer, producing around 60 percent of the global supply. It also produces Covid-19 vaccines, and has exported millions of doses of the UK’s AstraZeneca coronavirus jab, known locally as Covishield.