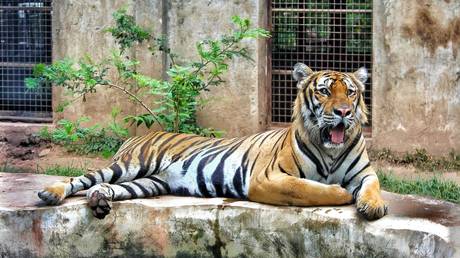 A tiger, two lions and a member of staff at a zoo in Sweden tested positive for Covid-19, the country’s National Veterinary Institute (SVA) said. One of the cats was put down after suffering neurological and breathing issues.

The 17-year-old female tiger was euthanized on January 11 “for animal welfare reasons due to severe respiratory and neurological symptoms,” after its condition deteriorated rapidly over a couple of days, the institute said.

The big cat was an older animal with a poor prospect of recovery, it added.

Samples from the animal were then tested for Covid-19, with positive results confirmed by the SVA on January 13.

The German IDEXX bioanalytics laboratory also found a positive result for the virus a day later.

One member of staff caring for the animals at the zoo – which has not been identified – tested positive for the virus, while three others who also showed symptoms are awaiting their test results.

Two Covid-19 cases were also confirmed in an enclosure of four lions that showed “mild respiratory symptoms,” following an analysis of fecal samples.

The revelations were disclosed in an email sent by Sweden’s acting state epizootiologist, Karl Stahl, on Sunday and published by infectious disease monitoring service ProMED on Monday.

Stahl said genome sequencing carried out by the SVA on the tiger revealed that the Covid-19 strain it had contracted is of the lineage B1.177.21.

The SVA’s autopsy of the tiger on January 16 indicated the animal was likely asymptomatic for Covid, although the full results are still pending.

Vets found some “blood-tinged mucus” in the animal’s lung system, but suggested this may have been “age related and thus probably not related to SARS-CoV-2.”

There were no clear signs of pneumonia in the animal.

A male tiger in the same enclosure as the female also showed “moderate respiratory symptoms.”

The zoo is closed for the season and the on-site vet has introduced “internal biosafety measures,” Stahl said in his email.

Earlier this month, three gorillas tested positive for Covid-19 at San Diego Zoo Safari Park, in what are believed to be the first cases among the species in the US.

Other animals have also contracted the virus, including mink in Denmark, dogs in Canada and a cat in the UK.