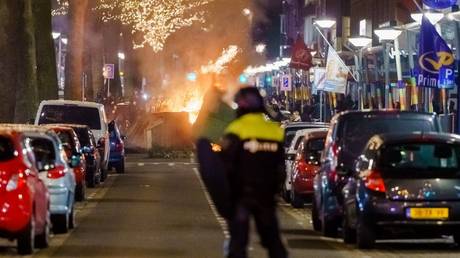 Anti-lockdown riots have broken out for the third consecutive night in the Netherlands, with fires lit, police vehicles burned, and windows smashed. Police have vowed to crack down on the lawlessness.

Hours after Dutch Prime Minister Mark Rutte condemned two days of anti-lockdown riots as “criminal violence” and vowed to keep a controversial curfew in place, disgruntled citizens took to the streets again for another night of mayhem.

Masses of black-clad rioters assembled in the streets of Rotterdam on Monday, as fires were set and police vehicles vandalized.

As video footage showing a gang of rioters smashing the windows of a police van spread around the internet, right-wing politician Geert Wilders demanded that the government “deploy the army and clear our streets.”

Armored police faced off with rioters and arsonists in The Hague, Den Bosch, Haarlem, and reportedly in other cities throughout the country.

More than 200 people were arrested during Sunday night’s unrest, and police issued a warning on Monday to would-be rioters. “Tonight we will be back on the streets to enforce curfew,” they tweeted. “If you deliberately do not obey it and you commit or call for criminal offenses, please know that we can arrest you for this later.”

The police added that video footage would be used to identify and arrest anyone breaking the law.