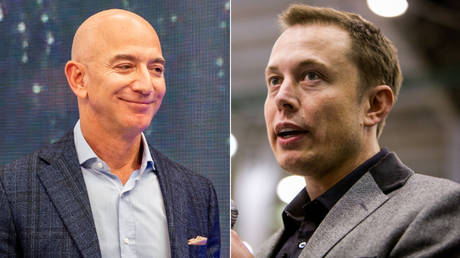 The world’s wealthiest men Elon Musk and Jeff Bezos are embroiled in a battle in front of US regulators over rival satellite internet projects. On Tuesday SpaceX CEO Musk accused Bezos’ Amazon of trying to “hamstring” his system.

The conflict focuses on SpaceX’s efforts to convince the US Federal Communications Commission that it should be allowed to station its Starlink satellites closer to Earth than originally planned. Amazon is among the companies attempting to block the move, saying it would interfere with other satellites.

Musk himself waded into the row on Tuesday, taking to Twitter to reiterate that his company is much further down the road in the race to develop the technology. “It does not serve the public to hamstring Starlink today for an Amazon satellite system that is at best several years away from operation,” he said.

SpaceX currently has around 1,000 Starlink satellites in orbit, offering service to a limited number of users in the US, Canada and the UK who have bought a specialised antenna device to pick up the signal.

The broadband has thus far performed well, but remains in the beta testing phase. Early adopters can participate in the “Better than Nothing Beta” test if they’re willing to fork out $499 in an upfront cost and $99 per month after that. SpaceX plans to launch tens of thousands more over the coming years and aims to offer “near global coverage.”

Amazon is working to create its own system, Project Kuiper, and has plans to launch over 3,000 satellites into low-Earth orbit. In December it passed a critical early hardware milestone on the antennas for the network but it has yet to produce any satellites.

The two tycoons have traded the title of World’s richest person (on paper at least) in recent months, with Musk overtaking Bezos earlier in January on the back of Tesla’s soaring stock price.