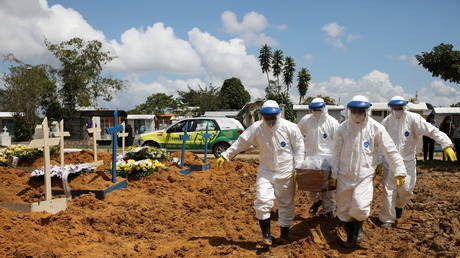 The Brazilian Supreme Court has authorized an investigation into the country’s health minister Eduardo Pazuello, who’s accused of bungling the response to the Covid-19 crisis and failing to tackle a major outbreak in the Amazon.

Brazilian Supreme Court Justice Ricardo Lewandowski approved the probe on Monday, which will focus on Pazuello’s handling of a deadly viral surge in the city of Manaus, provincial capital to the Amazonas state and home to more than 2 million people.

Attorney General Augusto Aras said the minister faced “extremely serious” allegations, adding that Pazuello had a “legal duty” to respond to the crisis in a timely manner, and that failure to do so could open him to “civil, administrative and / or criminal liability.”

It is necessary to deepen the investigation in order to obtain robust information for the initiation of any legal action.

The inquiry, requested by Aras last weekend, is set to begin as Manaus is slammed by another wave of the illness, with a new, more infectious coronavirus variant helping to overwhelm hospitals with patients and drive the city’s healthcare system toward “collapse,” according to local media reports.

“There’s an atmosphere of disgust, abandonment, despair and impunity” in Manaus, a local health clinic employee told the Guardian last week, calling the situation there a “complete massacre, a desperate situation, a horror film.”

Calls for the probe came after Pazuello presented a 200-page “action report” on the ministry’s pandemic response in Amazonas last week, which the attorney general’s office said shows willful inaction by the minister. While a sharp uptick in infections was observed there at the tail end of December, the AG’s office said Pazuello didn’t dispatch officials to the region until over a week later. The document, signed by Pazuello, also allegedly acknowledged an imminent collapse of Manuas’ health system due to a surge in patients and a lack of resources, namely a dire shortage of oxygen. But despite being aware of the severe scarcities as early as January 8, the ministry didn’t arrange for a new shipment until days later, on January 12, the AG said.

Moreover, while the Health Ministry recommended that severely ill patients be transferred to hospitals in other states on January 6 to mitigate the burden on local resources, efforts to make that happen only began 10 days later.

Pazuello will also be asked to answer for the delivery of 120,000 doses of hydroxychloroquine to Manaus some eight days after he became aware of the serious situation there, while offering no scientific basis for the use of the drug, Aras said. Though hydroxychloroquine, an antimalarial medication, showed some promise in treating Covid-19 in earlier stages of the pandemic, research on the drug has offered mixed results, with no clear evidence it is effective.

The minister, whose office said it is still waiting on official notification of the probe, traveled to Manaus on Saturday to oversee the distribution of vaccines there, where he will remain “as long as necessary.” Taking office last September, Pazuello is the third health minister to occupy the post under President Jair Bolsonaro, with his predecessors Luiz Henrique Mandetta and Nelson Teich both leaving office following disputes with the head of state over the pandemic and the government’s efforts to stop it. Bolsonaro, who himself contracted the illness last year, has repeatedly voiced skepticism about lockdown orders, social distancing and other virus-related measures throughout the health crisis.

Brazil has tallied more than 8.8 million coronavirus infections and some 28,000 fatalities since the outbreak began, according to official data, with nearly 250,000 cases and 7,100 deaths reported in Amazonas alone. While Sao Paulo, Brazil’s most populous state, remains the hardest-hit region in terms of total cases, counting in excess of 1.6 million, the rural Amazonas have also taken a beating, with reports of “mass graves” in Manaus last year during a major spike in deaths.