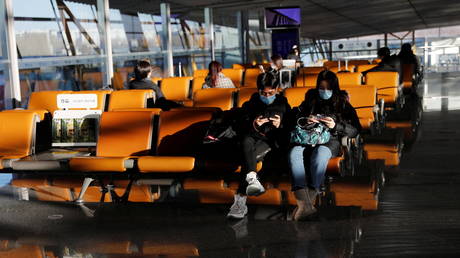 A Chinese woman who took anti-inflammatory drugs to hide her Covid-19 symptoms on a flight from the US to China last March was sent to prison by a Beijing court for obstructing the prevention and treatment of infectious diseases.

A sentence of one year behind bars and one year’s probation was handed to Li Na back in October, but the verdict was made public just recently, making headlines in the Chinese media on Tuesday.

The woman’s behavior violated the anti-epidemic rules of the Chinese customs and civil aviation departments, posing a “severe risk” of spreading the coronavirus, the People’s Court in Beijing’s Shunyi District said in its ruling.

Li had been living in Massachusetts for the last few years, working for US pharma company, Biogen. But, like many of her compatriots, she chose to return to China during the pandemic, apparently believing that the local authorities would be more effective at stopping the disease than their Western counterparts.

The 37-year-old felt sick several days before the flight, but didn’t return her tickets despite one of her colleagues already being diagnosed with Covid-19. The woman took antipyretics before boarding in order to conceal her own coronavirus symptoms and performed a lengthy aerial journey from Boston to Los Angeles and then to Beijing.

Her health problems were only discovered after landing at Beijing International Airport. On March 13, 2020, Li was diagnosed with the coronavirus, which forced 63 of her close contacts to go into quarantine.

Somewhat ironically, the woman received firsthand knowledge of the commitment of the Chinese authorities to tackle the spread of the virus and punish any violations after a court sanctioned her arrest in early June.

Biogen also severed working relations with Li, arguing that her decision to go to China without informing her employer and in violation of health guidelines was inconsistent with the company’s values.