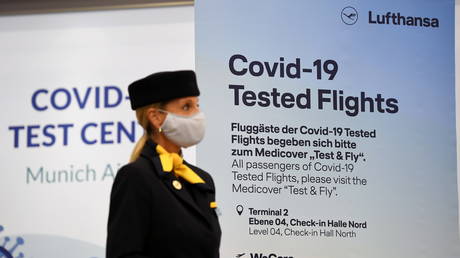 The German government is considering border closures and a ban on almost all air traffic in an attempt to limit the spread of more transmissible Covid-19 variants, Interior Minister Horst Seehofer said on Tuesday.

“The danger posed by numerous virus mutations forces us to consider drastic measures,” he told the tabloid Bild.

On Sunday, Seehofer reportedly presented Chancellor Angela Merkel with several plans for restricting travel to the country. Bild reported that Merkel was in favor of tightening travel measures.

However, the German Travel Association has blasted any such move, in the light of the damage already inflicted on the tourism industry by the pandemic, and voiced its concerns about freedom of movement.

“The federal government should reflect upon the fact that freedom of movement is a basic right – not a politically granted privilege,” it said.

Germany has reported scores of cases of the more infectious B117 variant of Covid-19 first discovered in the UK, and, at the weekend, health chiefs quarantined an entire Berlin hospital, after 20 patients and staff tested positive for the strain.

The Robert Koch Institute (RKI) has also reported outbreaks in several German states of the strain discovered in South Africa, as well as cases of the variant that originated in Brazil, which the RKI says it “expects” will spread further.

A lockdown is in place across Germany until at least mid-February, and the government has made medical-grade masks mandatory on public transport and in shops.

It also requires foreign arrivals from countries where variants have been detected to provide a recent negative Covid-19 test on arrival.

Germany recorded a further 6,408 infections from the virus on Monday and 903 fatalities, taking the total death toll to almost 53,000, according to data from the RKI.